Success is a continuing thing.  It is growth and development.  It is achieving one thing and using that as a stepping stone to achieve something else. – John C. Maxwell

While it may sound unique to our readers, having CEO/Founder Bill Rogers closely involved in the journey of his people is not uncommon around here. When asked about this month’s Homie Highlight, Kristian “Kali” Lawton, he remarks, “It has been a real pleasure watching Kali grow at Homeowners over the last decade. Growing people and giving them the opportunity to learn and contribute is part of our DNA. It’s exceptionally rewarding when you have someone as eager to contribute as Kali.” Kali is a story of success through personal growth and development led by those close to her heart. As those forces combine, her story continues being written with a known ending – success.

Kali Lawton is an Arizona native and started her venture with Homeowners Financial Group in 2012. She relocated from Cave Creek, AZ to Prescott AZ where she worked her way up from an entry-level position to a role supporting Laurie Lawton Scott, Prescott Branch Manager and a Top Originator in the company. Kali began learning the basics of mortgage lending early on by spending time creating fundings packages with Post-Closing Supervisor Brent Beeny, shadowing processing teams with Processor III Tiffany Sharp, and by slowly moving through each piece of the transaction.

As her skill-set grew, Kali decided to get her originating license and join the Lawton Scott Team. Laurie gleefully states, “I’m so proud of what she has grown into. She has been running our business in the background for years and has every intention of carrying on the legacy of the Lawton Scott Team for many more years to come.” Running the business is also quite literal in this case as one of Kali’s favorite parts of the job is the place-to-place and face-to-face interaction she has with their clients. This includes frequent in-house visits to collect needed documents, getting signatures when needed, or just saying hello and reminding each client or partner that their relationships are valued. (In fact, the Maid of Honor at Kali’s recent wedding started as an acquaintance who reached out to the Lawton Scott Team for home financing!)

Developing relationships and a stronger community are part of Kali’s daily motions in her personal life and seen very clearly in her outside interests. Feline fanatic (or Cat Mom) is Kali’s honorary title as she cares for 5 cats (including the 2 kittens she just recently adopted!). Kali also enjoys building connections as a Gamer, enjoying skill-based roleplaying games with her online network. Additionally, she considers herself a Foodie and Mead enthusiast, with Traveler being a new addition to her list of badges. Kali will enjoy her first non-continental U.S. flight this month as she and Laurie visit her brother who is currently stationed at Marine Corp Base Hawaii.

While the baton is not being passed just yet, in some ways Kali has become the teacher of the Prescott office. She plays the role of local IT support and marketing media guru amongst other things in progressing the team forward and growing their business. Always focused on people, relationships, and the right way of doing everything with her heart. Summarized by Laurie: “She is the epitome of love within the team and the community”. Summarized by us: she is the epitome of our collective values at Homeowners Financial Group.

We are always looking for experienced professionals who are committed to serving the needs of borrowers while maintaining our corporate culture focused on family. If this is you, please contact us at homeownersfg.com/careers for more information on becoming a Homie 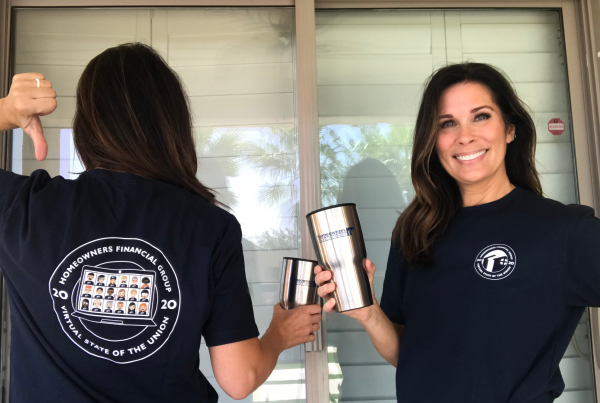